GOD IS KIND: The tangibility of faith

I just got back from ministering at our Shekinah Assembly camp meeting Nnewi, Anambra. I announced to my household that I was not going out anymore (church and market included). You might now know why this is a big deal let me explain. 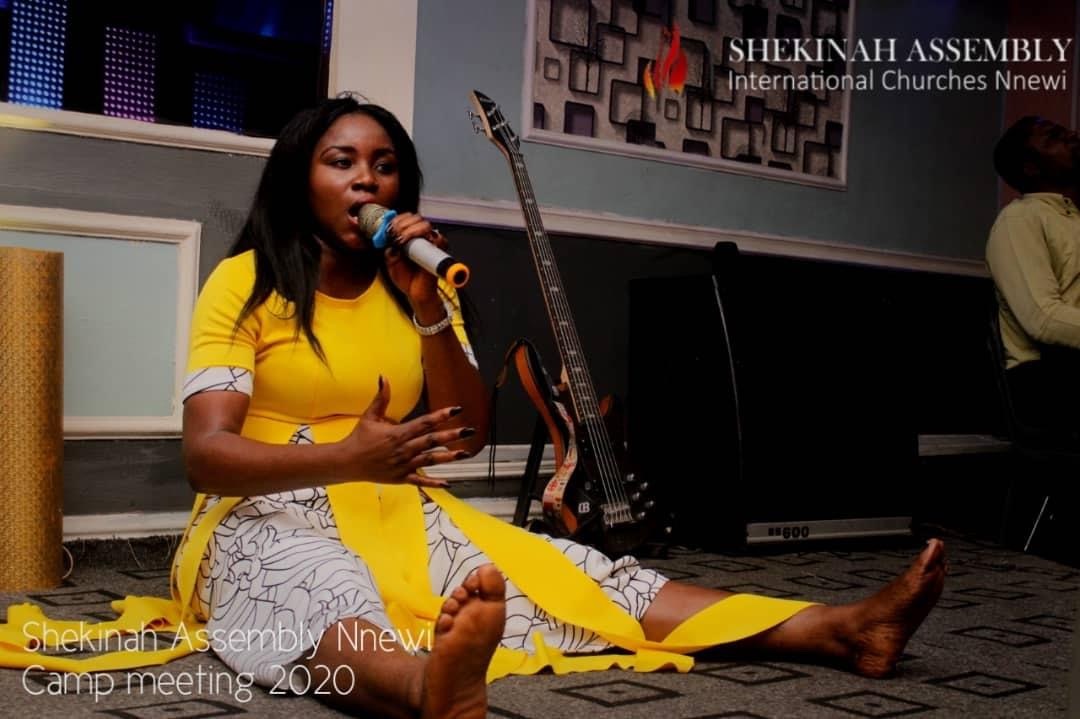 I have extended family members in my home (My mother-in-law and sister-in-law). Technically, everyone depends on me to take care of them as a mother in Israel should. That announcement meant they had to step up to the responsibility of going to the market. I was going to cook. It also meant that my husband would have to go to church without me.

To the ordinary man, their wife, daughter and sister must have gone crazy because I radically declared myself pregnant until my body started acting so, despite seeing my periods every month from then on. If they thought I was crazy, none said it to me. Both my mother and sister in-law stood in faith with me. Every time I said I was pregnant, they said Amen. My husband was just laughing at me while he let me do my thing. To him, I was being radical and would have children eventually.

I told him, everything I have ever had in this life including him, came when I made up my mind that it was now or never.  I didn’t have the luxury of time to wait for “eventually” on this children matter. I’ve got a ministry to focus on.

While he found my ceaseless aggressive faith confessions a little too much, he supported me in every radical step I took.  Let me even rewind to radical faith steps I took prior and during that time and how my husband supported me.

♥️When we had the first miscarriage, In October 2019, he gave me money to decorate a children’s nursery. It was my expression of faith and a therapeutic activity for me to heal. I hung up the possible  names of my twin boys on the wall and spoke to them anytime, anyhow as though they were real.

♥️ After the third loss, In July 2020, I started shopping twin matching sets for the boys. I bought as though I was already pregnant and expecting them shortly. My husband gave me pocket money I used them ALL to shop in faith. This girl was desperate.

♥️ In August 2020, I officially declared myself pregnant. (hahaha). Yeah, faith is weird.

♥️In September 2020, I added house arrest to it plus I aggressively constructed and proclaimed my confessions of pregnancy and safe delivery.

I organized a special birthday experience for my mother in-law which included a thorough Spa treatment done by me. The 16th was her birthday. I shared interesting video highlights here on Facebook.  My MIL was overwhelmed. She told everybody that had an ear 😂😂.

I got home that day from the hotel where we lodged her. I had barely sat on my bed to unwind when I heard the Lord say,

Tell your mom-in-law that I have heard and would give you your desired children. She is troubling me intensely. Tell her I’ve answered already.

I smiled. Planing to tell her when she returns from her vacation or when I visit her the next day. The Lord came again saying,

Annie tell her now or she wouldn’t let me have my rest. I’ve answered already she should stop troubling me about the matter.

I wondered, what kind of prayer was this woman praying this hot evening that almighty God can hardly wait to stop her. I called her, she didn’t pick. Shortly afterwards, she called back and I gave her the message. She shouted a deafening Amen. Indeed, she was praying for me after we left.

♥️ In October 2020, I ordered 2 baby beds/cots. My husband paid. You may not understand what it means to pay for 2 baby beds when you’ve not even seen a positive baby test. I appreciate this man who accommodated my crazy.

That October, my daughter Kellar Usiayo sent me a message saying “Mama you are pregnant”. I said Amen. She said take a test. I told her I’ve had up to 7 tests at that point that they were all negative. I explained that my body was feeling and looking pregnant but no medical confirmation yet. She said mama take the test first. I took the test and it was negative. I told her. She said, mama I am your confirmation. You are pregnant and that is all. Those words pumped me. I didn’t have a choice after all, God had to do it or do it!  Thank you my baby girl!

♥️ November 2020 I updated all my social media bios to include mom of twin boys. This thing was real to me, I didn’t care what anyone thought or dare say. It is still there, I’m not taking it down. My boys will come in Jesus name!! Amen.

Better say Amen for me o!

Mind you, since September, when I come before the Lord to pray about children, he will leave my matter and be telling me territorial things and other matters on his heart.

Until, I listened to one of Pastor Selman’s message and he asked the congregation to embark on 7 days of praise. I said, that’s it Princess!

My husband was out of the country so I had ample time and space to do this. I began the next day.

I moulded my daughter and twin boys using wrapper and bibs. I praised my Jesus with all I was and am. Only one focus, “manifest my children.” 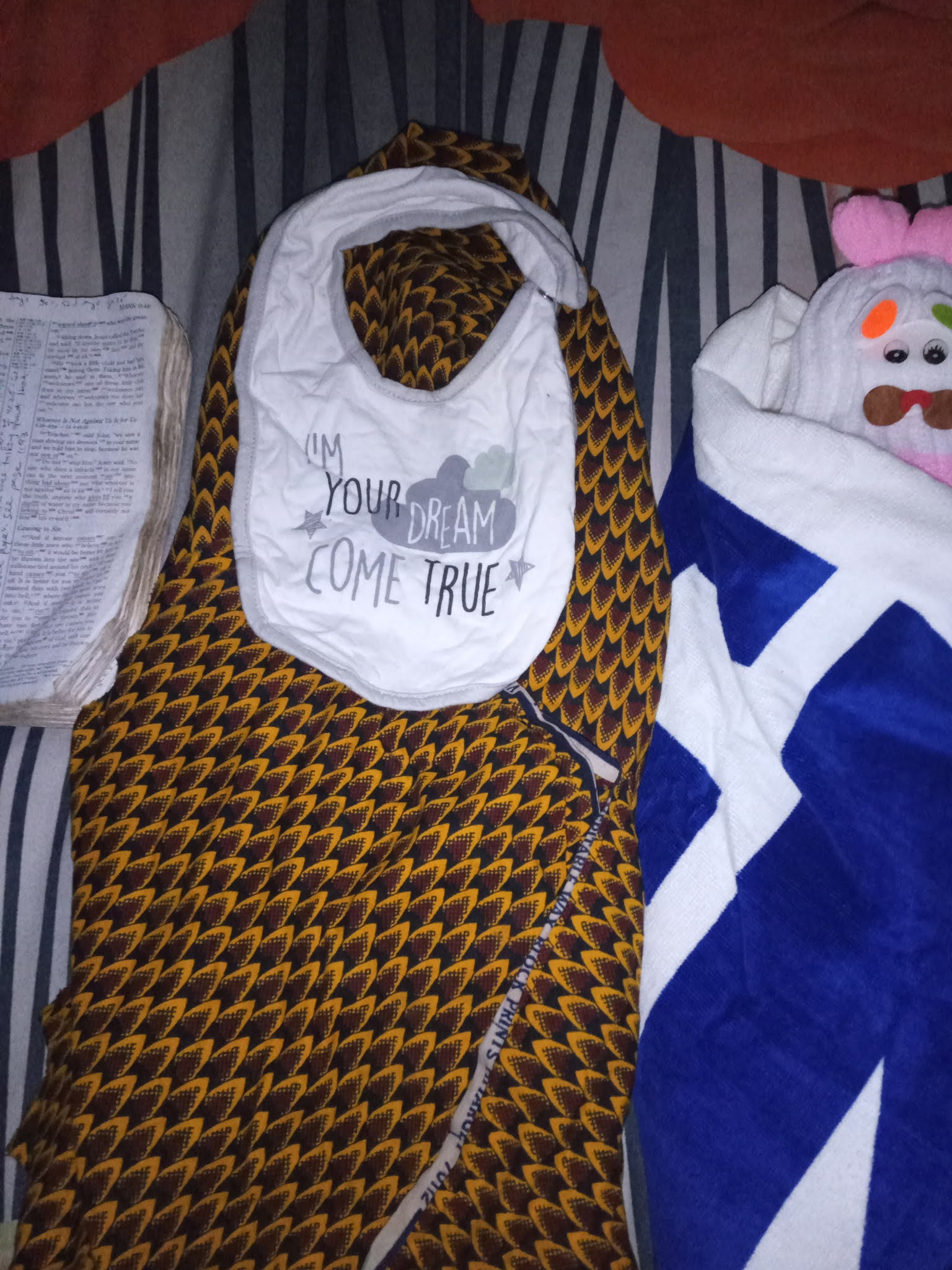 My moulded children during my praise party

Day 1 and 2 went. By day 3, something shocking happened to me!

October 11, 2021
Read part 1 here  In Lagos, I fell ill as soon as I landed. The city is crazy. The traffic is unholy and the carbon monoxide infested air is an extension of hell. I didn't want to get back on that road to any hospital so we got a qualified nurse to come treat me at home.  The Nurse said she couldn't treat me except I did a pregnancy test alongside malaria test. Both came out positive. I was glad that the sickness wasn't Lagos madness inspired. My baby must have wanted to notify me since I refused to take a second look. Unfortunately, she used one of those quinine brands  in attempt to protect the baby. She sadly didn't check with me first.  I became miserable from all the itching like one who hugged devil's beans. I tried to rest as much as I could and thoroughly enjoyed both my family and ministry itinerary while being pampered like an egg. I preached passionately at the event I was invited to. I talked about loving God and serving him devotedly even when disa
4 comments
Read more