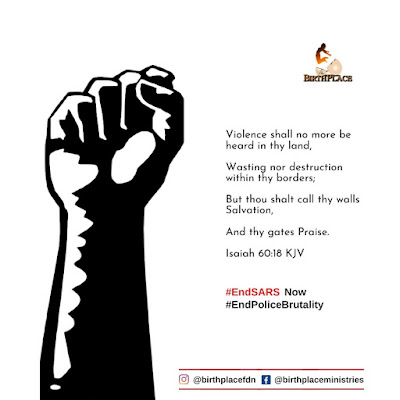 The gates of Nigeria are opening

Where are the gate keepers?

Arise let us man the gates. "The prince of persia" tries to invade,  the gate keepers must arise.

We built a chain. We man the gates. This times are crucial. This not a time to sleep. Guard the gates of every axis in Nigeria. Guide the gates.

The "Prince of Persia" approaches. They are coming from the north. They are not Nigerians but they are masquerading as northern Nigerians.

Their faces are covered in white clothes. They are dressed like Arab muslims.

We must stay in prayer. Long after these protests are over.

The above is as seen and heard by Kellar Usiayo

I believe that Kellar (the bearer of this prophetic vision and word), heard prince of Persia because that would be the easiest way for most people to understand the opposition we are dealing with as they may not know about the territorial operations of princes, hence saying the "Prince of Niger tries to invade" may not be readily understood.

Furthermore, We receive prophetic words, visions or symbols through the filter of our understanding.

For clarification, there are two princes over territories.

This Prince (a fallen angel) is not a demon and so cannot be "casted out" as we do demons.

To prevail over his plot and agenda for the territory Nigeria, we must align with the Prince of God over Nigeria. There is  no other way to align but by prayer, standing  in righteousness and walking in obedience. 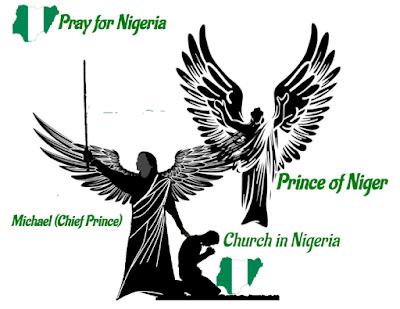 This graphic was seen by Chisom and drawn by him at the intercessory prayer for the nation on October 1, 2020 by the brethren at Shekinah Assembly, Lagos.
We see Michael the chief Prince of God (Daniel 10:13), strengthening the church in  Nigeria, whilst the Prince of God assigned over the Niger area lifts his hands in worship and intercession for the church and the nation.
On the 16th of October 2020
I, Princess-Anne heard the  prince of God over Nigeria say thus;
The pole of the North over Nigeria is judged.
Times and a half and the reformation shall be complete. The constitution shall be reformed. The Economy shifts. Nigeria shall become a desirable nation.
Sons of light, awake!
Proclaim what you hear.
The price of the almagamation is fully paid for. Now I shall establish my purpose radically and unstoppably.
Nigeria is my inheritance says the Lord. Don't compromise for I am with you. This is the set time to favor the sons of Zion. The Lord is in the midst of his people.
The destiny of Nigeria is coded in her national anthem.
"The labour of our heroes past shall not be in vain"
The above is a steady chant in the court.
Blood of martyrs - believers and just men cry for the fulfilment of the righteous cause for which they died on behalf of the nation.
Believers shall hear proclamations.Do not hesistate to declare them.
We need a steady voice of sons declaring the writings of the destiny of the new Nigeria.
Over time, many have tried to make it a tribal thing. Igbos to a side and Yorubas to another but that wasn't the plan.
"one nation bound in freedom, peace and unity" is the goal of this court.
Believers not tribes shall execute justice. If you go by tribes, then darkness shall find its way into the throne of the nation again
Then I saw the debts of Nigeria.
The intentional moves by our leadership to sell us off to Creditors (Specifically China) so that we will be bowed forever after China eventually seizes important infrastructure in the nation.
Then I heard the Prince of God over Niger say,
I need men at the gate to concentrate on praying for the economy of Nigeria.   The current economic throne of the nation is about to be abolished but if believers do not legislate accordingly, the economy may never be revived.
The political and the Economic thrones govern the social. I need men dedicated to one of each gates (Politics and Economics), proclaiming the decrees of the court until the nation takes shape.
Read:  Prophetic Update
We prevail!!
Join us at the Birthplace Foundation's facebook page as we prepare for year 2021 in prayers.
Partner with us to impact the lives of citizens living in the slum of ilaje otumara in Ebutte Metta Lagos.  See details here 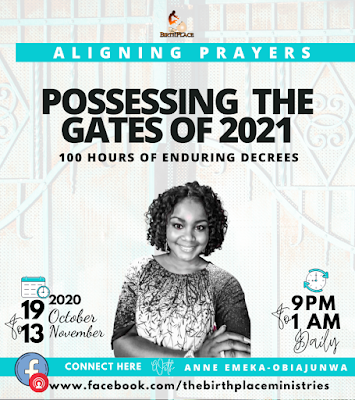 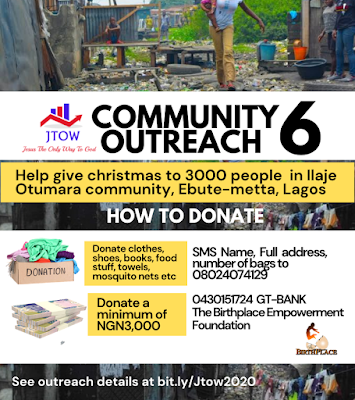