GOD IS KIND: The Courage of patience

October 11, 2021
Read part 2 here
It was a beautiful morning and yours truly was still bleeding.
I just got done making breakfast and was about to set the table when I felt an extra weight down there.
I left the kitchen, washed my hands and sent it below while squatting. Men and brethren, see who fell off me. 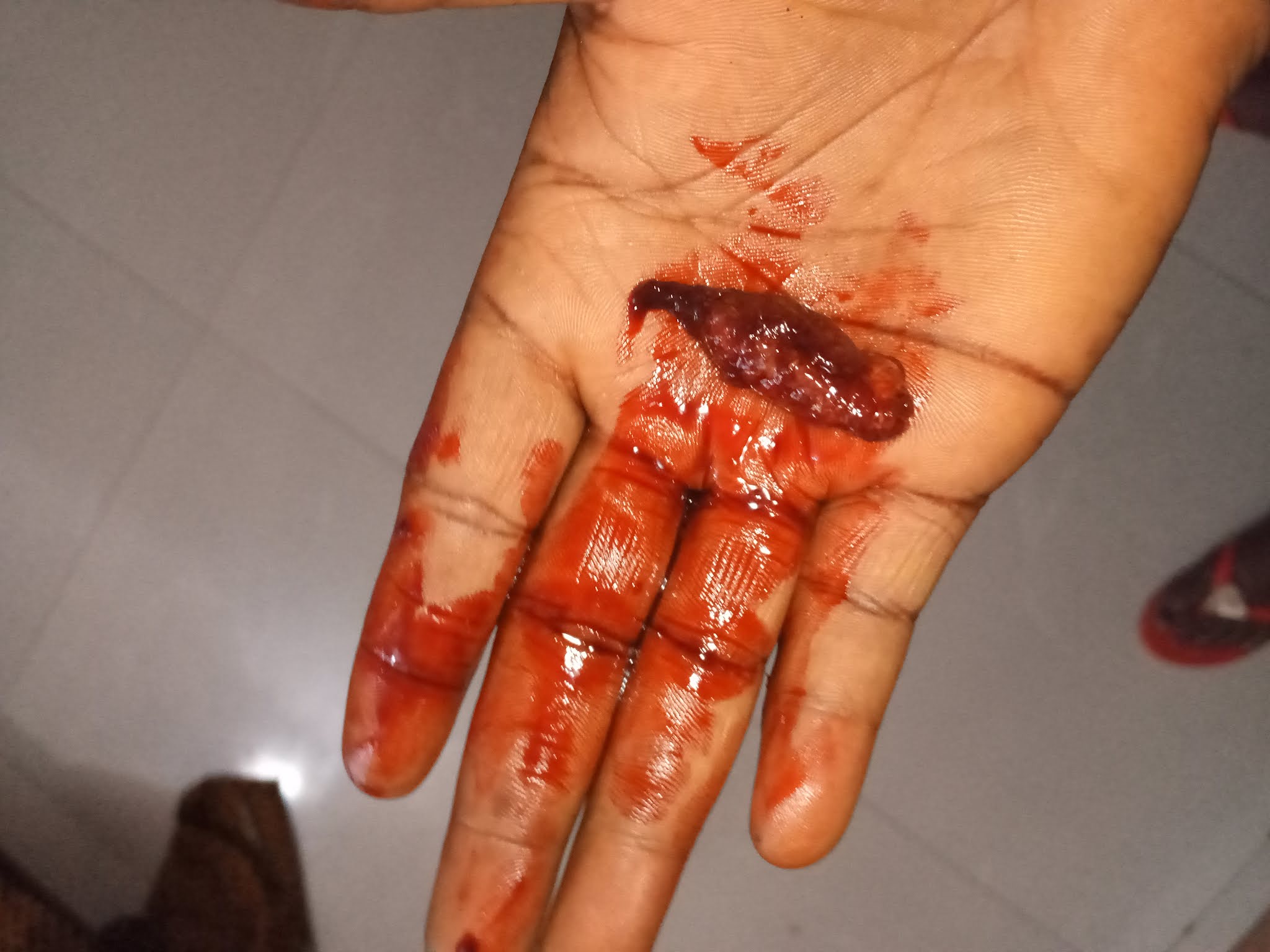 The 1cm Fibroid they said I should be operated for 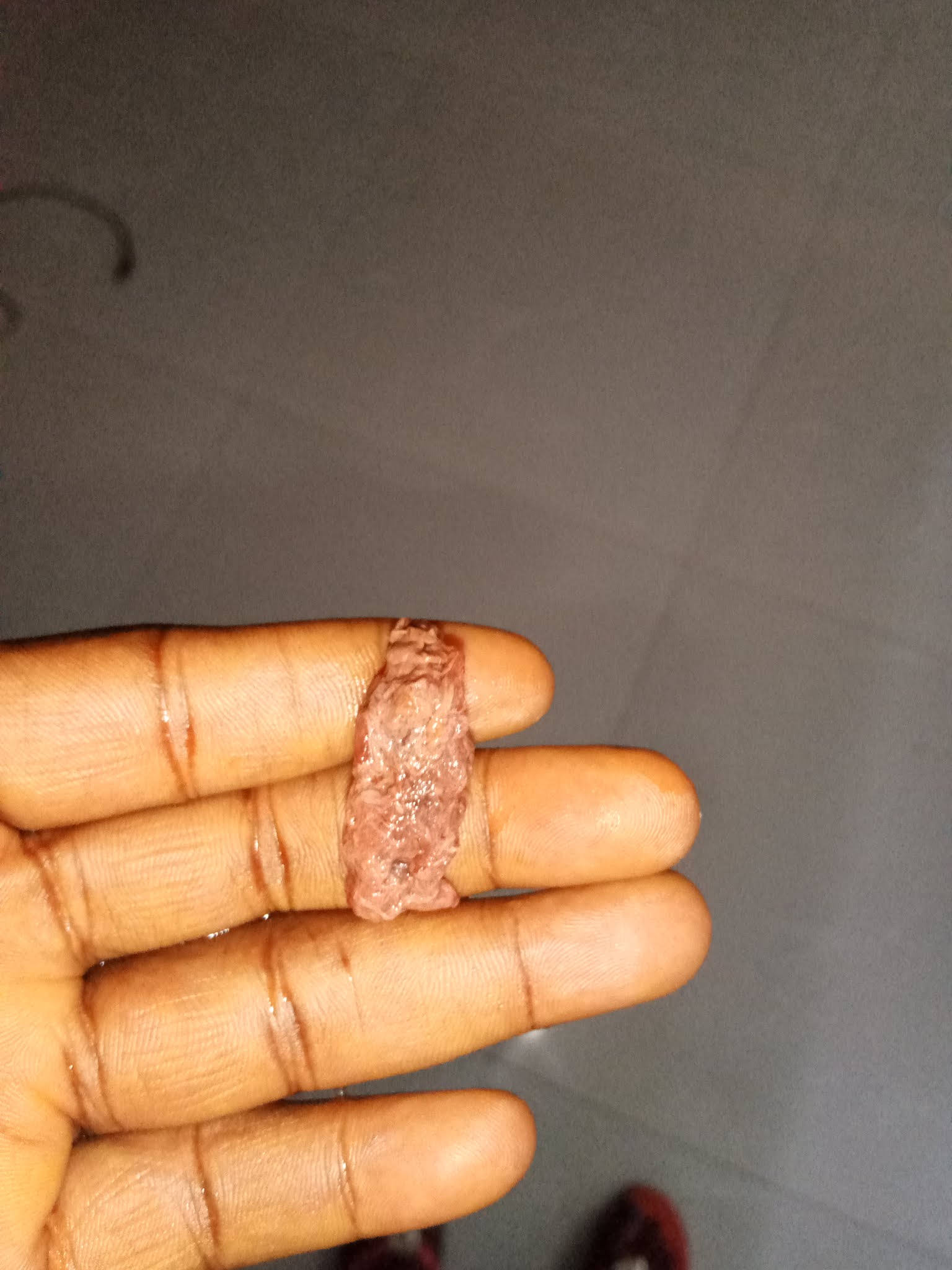 A better view of the monster
My husband and I gave thanks. God had delivered me early. I took these photos as proofs of his kindness and as reminders that He is still with and for me, regardless.
I became hopeful and patiently waited to conceive another. I can't deny  that I had several moments of sadness and weeping. My husband who wasn't moved by the situation became worried for my worry. He bought me things, took me out regularly and kept asking what he could do to make me happy. While I appreciated his efforts, they weren't enough to comfort my grieving soul. I had many, many days of sadness.
January went by, so did February. In March 2020,  I conceived. I initially took a job because I wanted to forget my sorrow. That same March that I resumed, I conceived. I didn’t even know. It was my boss that told me, “you look pregnant”. I said, “amen.”
Got home and decided to do a test. Men and brethren it was positive. At this point, positive wasn’t a thing of joy in my home. Well to me, it wasn’t. I just wanted to hold a baby from my womb and my husband’s loins.
Afraid of negative reports, we decided we weren’t going for scan to confirm if it’s viable. I also wasn’t interested in seeing any doctor as they didn’t help me in the other pregnancies. Besides, they said missed abortion doesn’t happen twice so this one must be viable. I carried on at work and in ministry while taking antenatal drugs.
I came home from work on 15th June 2020 and started bleeding. This time, I didn’t cry. We decided to go for a scan and found that I had just lost a pregnancy.  I didn’t mourn expressively this time.
We were in the middle of an online prayer meeting which I was hosting (The 50th hour tongues). I needed to focus on that. I didn’t have the time to sit and be sorry for myself. I showed up everyday, like nothing happened. However, The one thing that worried me most was how I was going to stand another evacuation. The last one terrified me, such that 2 years later, I physically shook when I remembered or had to talk about it.
The next day (June 16) was my niece-in-law’s birthday, she calls me mum and is technically my daughter. Everyone in my house thought she wasn’t going to have her birthday marked because they were expecting me to grieve expressively as I did for the other two losses. To their surprise, I got my little girl in the car and drove off for a photo shoot. It was her first birthday I wasn’t going to let the devil rob her of that joy. We had fun, got back home and had a private celebration for her. I was grieving for my child inwardly, but I didn’t think it was worth making the pretty girl miss her first birthday. Shame on you Satan, you didn’t touch me that deeply this time.
We finally got an appointment for my evacuation. I insisted on being knocked out. The doctor had to agree when he saw me shaking like an earthquake descended. While unconscious, I had quite some experience.
According to my husband, I was profusely confessing my love to christ and pledging my allegiance to him. I was crying while at it. I also said I could see my children, 3 of them and was asking for my niece in law too that she made them 4. I said several other things which he shared with me when I woke.
I couldn’t remember seeing Jesus or seeing the other things I was loudly talking about, but I did remember seeing 3 children who came to me while I was unconscious and were comforting me. I saw a girl and two boys. The girl was older.
I wondered why the girl was older because I was asking the Lord for twin boys to come before the girl. I believed God was going to answer my prayer that way.
Life went on and I began radical faith confessions. I was determined that 2020 must be my year. Then in September, I did something radical.
Continue here
Kindly leave your comments and share the hope!
Warm hugs
Princess-Anne
.