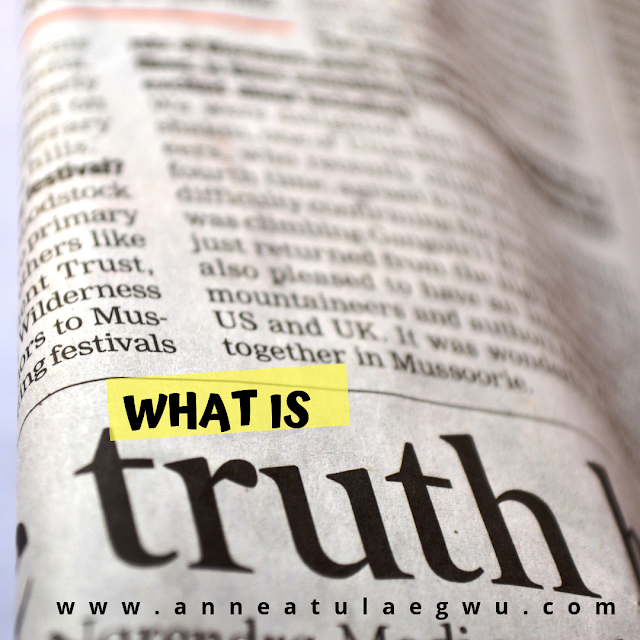 Standing before Pilate, Jesus bore several accusations from the Jews.  Under trial, Pilate asked the accused Jesus what his crime was.

“My kingdom is not of this world. If it were, my servants would fight to prevent my arrest by the Jewish leaders. But now my kingdom is from another place.” Jesus replied.

Jesus answered, “You say that I am a king. In fact, the reason I was born and came into the world is to testify to the truth. Everyone on the side of truth listens to me.”

This grand question has been asked for centuries. Several philosophers and men of various schools of thought have attempted to answer this question.

There is a need to identify the absolute truth, upon which our fragile lives, desperate hearts and feeble souls can stand when all the shifting factors give way.

We didn’t get Jesus response to Pilate’s question; perhaps because Pilate walked away as soon as he asked.

However, Jesus already told us what he meant by the truth long before he stood before Pilate.

In John 14 verse 6, Jesus boldly declares, “I am the way, and the truth, and the life; No one comes to the father except through me.

The identity of Jesus as the truth is the same through all generations, across diverse cultures of the world and shifting times and seasons.

Read: Is Jesus really the only way to God?

Jesus as the truth is the sanity that exists in a world of chaos and epileptic experiences.

What would you rather believe?

A truth that is relative and ever shifting in perspective or the truth which is eternal and ever enduring through the ages?

I urge you this day, to believe the truth.

For God so loved the world that he gave his one and only Son, that whoever believes in him shall not perish but have eternal life. John 3:16 (NIV)


Committed to your fulfillment
Anne Emeka-Obiajunwa