Alexia Adetutu loved to be called daddy’s girl. Her father, Mr. Oju Walter was totally obsessed with his girl. There was hardly anything Alexia desired that Mr. Oju wouldn’t make happen.

Growing up was sheer bliss for Alexia until her teens. She noticed how everyone loved her for her brilliant academic performances; yet, she didn’t feel satisfied. Having a massively wealthy father and an enviable academic record was supposed to be enough for Alexia Adetutu Walter but it wasn’t.

Just before her 18th birthday, a man came knocking on the door. “Come Alexia, I have something to show you”.

Alexia didn’t quite recognize this man but she hurriedly followed him. They walked a few streets away from Alexia’s address, into a huge well furnished mansion.

The chairs were made of dyed wool and animal furs. The roof was a see through kind as Alexia could see the cloud above. It was breath takingly beautiful as the ambience around the mansion beat all of Alexia’s exposure in Europe, America and Asia combined.

What may I  offer you, the man asked.
“umm, wa-a-a- water”, Alexia replied.
Stuttering because she was carried away.

The man snapped his fingers and a beautiful lady named Cognizance came over to serve Alexia a cup of chilled water.

“Sit my dear”, the man said to Alexia as he motioned to her to sit on one of the wool couches Alexia was admiring.

He went on to turn on the television and then it happened!

In less than 60 seconds Alexia saw how her dissatisfaction had been an indication that she was meant for more. More than witty inventions, more than heading board meetings, more than building the best brands in the IT industry.

She saw that she was meant for more.

Alexia was supposed to birth six inventions, two of which were to improve medical sciences. It turned out she only birthed two- one which became a game changer in the IT world and the other which greatly improved the education system in third world countries.

Looking at the man she wept, "how did I miss all that?" she asked.

With love in his eyes and deep compassion, the man replied, “You missed it because you were trying to be politically correct.
I pulled you several times to myself so I can reveal the secrets of true influence to you but you were concerned about being seen as spiritual and so you let the little I gave you, drift us apart.”

The man went on to say, “You don’t have time Alexia. Don’t let that be your end. You must prioritize our relationship so I can teach you to seize territories, overthrow ungodly systems and bestow true influence upon you. You can be all you want, but if you are not aligned with the father’s agenda. You are irrelevant.”

Tears like a stray river flooded her pillow. She was glad it was a dream…

Dear you, It is time for you to 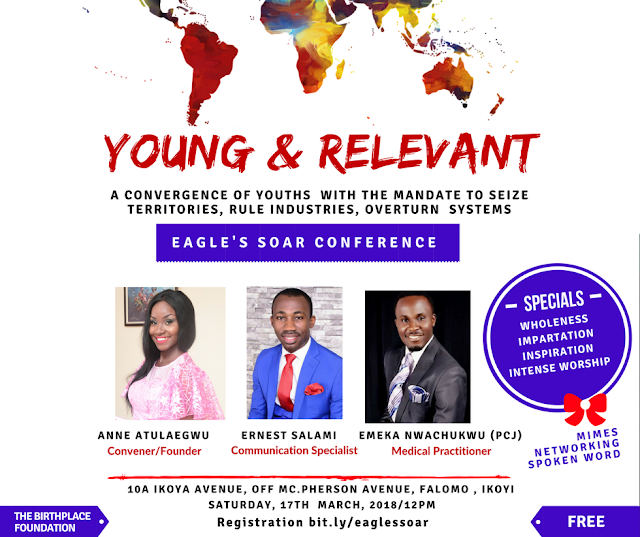 You don’t want to die and realize you were built for more than you eventually became through your life time.

If you consider yourself young and would like to be relevant before God and men then don’t miss this 5th Eagle’s Soar conference. 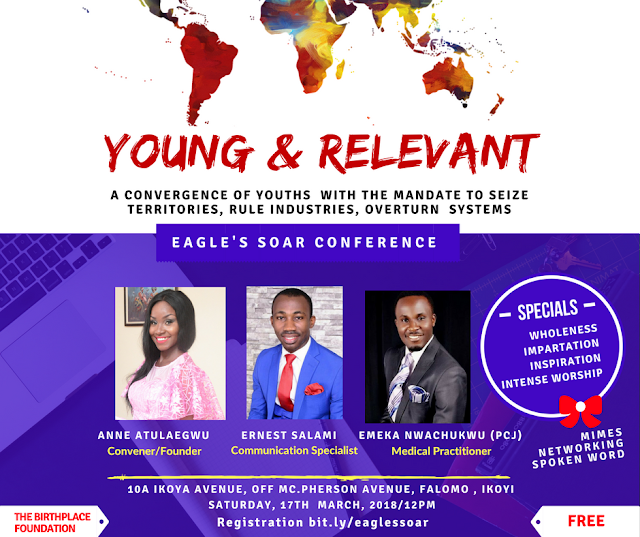 I can't wait to hug you!
Committed to your fulfillment
Anne Atulaegwu