IS ONCE SAVED, ALWAYS SAVED? Part 1 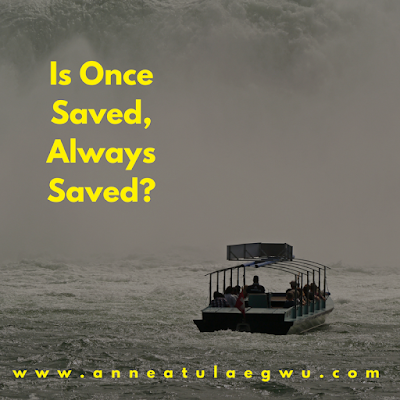 Picks a glass of chilled Hollandia strawberry yoghurt.
Gulps it fiercely, as you watch my throat dance like a locomotive engine, from north to south.
Takes the cup off my mouth, leaks my lips from left to right.


Turns to face you.

Thanks to stopping by my blog today, darling.
I believe you’ve probably come here to find an alpha and omega response to that question.

Let me let you know upfront, that I do not have an alpha and omega response to the question above. However, I intend to hold the torch steadily and clearly as we journey though the bible together. So prepare to find your own answers at the end of this gist.
Now there are two schools of thought in the body of Christ, regarding this subject. One says, “Yes, once Saved is forever saved”. The other says, “No, Once saved is not forever saved”. I believe you belong to one of these schools of thought.

The once saved forever saved proponent is founded in the following scriptures.

Jude 1:24 ”Now unto him that is able to keep you from falling, and to present you faultless before the presence of his glory with exceeding joy” (KJV)

Romans 8:38-39 “For I am persuaded, that neither death, nor life, nor angels, nor principalities, nor powers, nor things present, nor things to come, Nor height, nor depth, nor any other creature, shall be able to separate us from the love of God, which is in Christ Jesus our Lord.” (KJV)

Ephesians 2:8-9 “For by grace are ye saved through faith; and that not of yourselves: it is the gift of God: Not of works, lest any man should boast” (KJV)

John 6:37 “However, those the Father has given me will come to me, and I will never reject them”.

From the above scriptures, they rightly say that
·      Christ is able to keep us from falling.
· Death, angels, principalities, powers, heights, depths, creatures cannot separate us from the love of God.
·    Man is saved by grace through faith in Christ Jesus not by his works.
·       Christ will not reject those (the saved) the father has given to him.

If this is all that school of thought says, they are right because the bible doesn’t say what it doesn’t mean.

However, some people (not everyone) who have grasped this school of thought have stretched the word of God out of context.  They say
“It doesn’t matter what a believer does, He is already saved”
They appear to close their eyes to the following truth in those scriptures.
God is able to keep us from falling, but we can choose to fall. This kind of choice is called willful sin.

In  the preceding verses of Jude 1, Apostle Jude made reference to men who have crept into the church with false doctrines-turning God’s grace into shamelessness, unbridled lust and denying Jesus Christ as Lord (Jude 1:4). He then reminded his readers, that God once destroyed the people he saved earlier because they did not believe. (Jude 1:5)

Jude was saying, you’ve believed in Jesus as Lord and savior. If you stopped believing in that truth (by virtue of the false doctrines those men taught), you too will be destroyed regardless of having been saved earlier.

He gave example of angels who kept not (Greek rendition didn’t guard) their first state and are presently bound in everlasting chains under darkness , awaiting judgment (Jude 1:6)

The false doctrine propounded by the men in Jude 1 encouraged people to engage in Lust under the disguise of grace (Jude 1:4). Apostle Jude therefore reminded his readers of how God destroyed (through the vengeance of eternal fire) Sodom and Gomorrah because they gave themselves over to fornication and homosexuality.
These men who crept in were guilty of (Jude 1:8-19)
·        defiling their bodies
·        despising dominion (Lordship)
·        speaking evil of dignities (Greek rendition God’s glory)
·        Murmuring
·        Complaining
·        Blasphemy
·        Going after their own lusts
·        Mocking God and His word
·        Being governed by their feelings (sensual)
They were not only guilty. They were teaching people to do same.

To help his readers avoid been pulled off the faith by these men
·        But ye, beloved, building up yourselves on your most holy faith, praying in the Holy Ghost – Jude 1:20 (KJV)
·        Keep (Guard) yourselves in the love (affection feast/ abundant love) of God, looking for (accepting/reveiveing) the mercy of our Lord Jesus Christ unto eternal life- Jude 1:21 (KJV) greek emphasis added

On how to relate with people who behave like those men
·        And of some have compassion, making a difference (Jude 1:22)
·        And others save with fear, pulling them out of the fire; hating even the garment spotted by the flesh.
After which He gave glory to God
Jude 1:24-25 ”Now unto him that is able to keep you from falling, and to present you faultless before the presence of his glory with exceeding joy” To the only wise God our Saviour, be glory and majesty, dominion and power, both now and ever. Amen. (KJV)

1.  Be careful of those men who teach and practice the above false doctrines because if they joined the men, they will be lost.

2.    Be careful as they try to minister to others (do it with fear so you won’t be stained/become like them).
Verse 24, was giving thanks to God (who) has the capacity to keep us from falling but also needs our cooperation. The reason Jude kept saying, “Guard yourselves, Be careful”

Romans 8:38-39 “For I am persuaded, that neither death, nor life, nor angels, nor principalities, nor powers, nor things present, nor things to come, Nor height, nor depth, nor any other creature, shall be able to separate us from the love of God, which is in Christ Jesus our Lord.” (KJV) Apostle Paul mentioned a lot of things except SIN as an agent of separation from the Love of God.

Romans 8:1- “There is therefore now no condemnation (Penalty after being judged guilty) to them which are in Christ Jesus, who walk not after the flesh, but after the Spirit. (KJV) Greek renditions added

It is to follow your sinful desires and thereby fulfil the works of the flesh.
Galatians 5:16-25 explains  “This I say then, Walk in the Spirit, and ye shall not fulfil the lust of the flesh. For the flesh lusteth against the Spirit, and the Spirit against the flesh: and these are contrary the one to the other: so that ye cannot do the things that ye would. But if ye be led of the Spirit, ye are not under the law. Now the works of the flesh are manifest, which are these; Adultery, fornication, uncleanness, lasciviousness,Idolatry, witchcraft, hatred, variance, emulations, wrath, strife, seditions, heresies, Envyings, murders, drunkenness, revellings, and such like: of the which I tell you before, as I have also told you in time past, that they which do such things shall not inherit the kingdom of God. But the fruit of the Spirit is love, joy, peace, longsuffering, gentleness, goodness, faith, Meekness, temperance: against such there is no law. And they that are Christ's have crucified the flesh with the affections and lusts. If we live in the Spirit, let us also walk in the Spirit. Let us not be desirous of vain glory, provoking one another, envying one another.

This again shows that the believer can choose (willfully) to follow the spirit of God or his flesh.

It was after encouraging his readers to walk in the spirit as heirs of salvation, did he say nothing shall separate us.

JOIN ME AT THE PREACHER'S KIDS CONFERENCE THIS WEEKEND.
DETAILS HERE 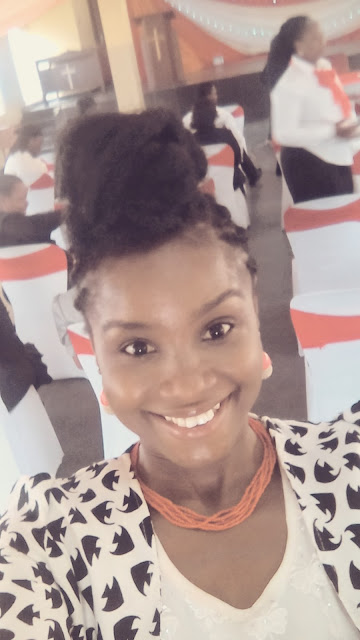