5 THINGS TO REMEMBER WHEN FEELING UNQUALIFIED FOR YOUR CALLING 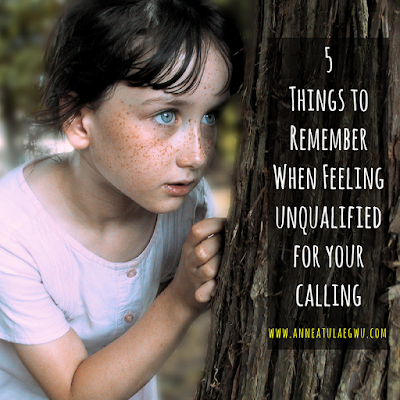 “Alicia, would you please stand? We have decided that you will lead the girls at the next boot camp. Everyone please applaud Alicia”.
Alicia placed her hands on the desk as she gradually stood for what felt like three hours to her. Pupils of grade 3 Diamond class applauded and hollered in excitement as their new leader was chosen.

Their applause and voices seemed to come from a distant land as Alicia couldn’t hear anything other than a group of people having some kind of meeting in her head. One voice said, “I have freckles and I’m not fine enough to lead the girls. Another said, “I don’t have a loud voice like Helen, they won’t listen to me”.

For what felt really long, Alicia kept recalling the 101 reasons why she could never be the girl for the job.
“Alicia, would you please step forward to address the class?” said Miss Diane.

Alicia was lost in her head monologue that she didn’t hear the teacher call. Everyone called at her before she gained consciousness and slowly moved towards the front of the class. Her legs could barely carry her.

“M..Mmm. Miss Diane?” Alicia stuttered. “I I I can’t possibly be the one for this job ma. I don’t have a loud voice and I’ve got freckles all over my face”. She added

Alicia stared at the teacher, not quite sure of what she meant.
Miss Diane understood by the look on Alicia’s face that the little girl didn’t make sense out of her statement and so she went on to explain.
“Alicia, the fact that the board has chosen you means we have qualified you to lead the girls and we will equip you with all the necessary skills to enable you be the best you can be at it. Trust me, your freckled face or gentle voice will be useful on this job. I only need you to accept the call to lead”, said Miss Diane.
“Okay ma.” replied Alicia still feeling somewhat unsure.

I can totally relate with Alicia and the many inadequacies I feel or sense every time the Lord asks me to do something for His people. Does this resonate with you?

I believe it’s a normal human feeling to feel unqualified at first when God beckons on us. This is because God ALWAYS chooses men for God-sized projects. A God-sized project requires God’s intellect, God’s resources and everything God in between to be accomplished and so the human mind can never truly feel game enough.

We see Moses in the book of Exodus 4 cooking up all the reasons why he couldn’t or shouldn’t lead Israel out of Egypt.  Some of His reasons which are so relatable to us today are

1. I’m a nobody
Sounds familiar?
Moses had long left the house of pharaoh and had become a shepherd at Midian. He knew the Egyptians had no regard or social respect for shepherds. In fact shepherds were an abomination to the Egyptians (Genesis 46:34).
“It would be better if you sent a powerful ruler, God. No not me”, said Moses.

Many times we size ourselves up against the world’s standard of classy, “somebody”, influential etc. we check our facebook or twitter followers and convince ourselves that we need to first have 10 000 active followers before we can begin that blog, write that book, host that event or do anything God has laid in our hearts.

You know what God’s response to Moses was on this excuse? God said I WILL BE WITH YOU (Exodus 3:12). You don’t need to be anything “big” or know all the”big” people to fulfill your calling. God says I WILL BE WITH YOU and if God be for you? You already know that the “big” people will be for you too; when they are needed to help accomplish that project! (Romans 8:31)

REMEMBER: God Will Be With You As You Walk In Your Calling. Don’t feel less than others.

Read: How to Effectively Use your Gifts

2. No one will believe me

When I first started Eagle’s Soar events ten years ago, I didn’t think anyone would come.  I shared the vision with a dear friend and he stood by me and we held it successfully for months before I left to attend the university in another state. We had good number of people turn up, the best I can remember. But when the Lord told me to host that, I dint think anyone would believe I had anything to offer. I was just some teenager fresh out of high school at the time. Today, Eagle’s soar isn’t where we started and has inspired several young people unto relevance.

You don’t need to be sure if you can convince anyone. Just obey.

You know what God said to Moses when he said “What if they won’t believe me or listen to me? What if they say, ‘The Lord never appeared to you’?” (Exodus 4:1 NLT)

God told him to do in open what He already done with Him in Secret – Turn a rod into a serpent, his hand made diseased and instantly whole(Exodus 4:2-9)

You see honey, our purpose or calling is not totally new or strange. It is often connected to an aspect of God that He has revealed to us. For Moses, that aspect was the miraculous side of God. What aspect has God revealed to you?

REMEMBER: God does with you on the outside, what He has done for you on the inside. Don’t be afraid to answer HIS call.

Read: 5 Things You Stop Expecting From Others

(Rolling my eyes)
Yeah Right! Who isn’t please?
Moses said, “O Lord, I’m not very good with words. I never have been, and I’m not now, even though you have spoken to me. I get tongue-tied, and my words get tangled.” (Exodus 4:10 NLT)

You probably tell yourself you’ve got freckled face like Alicia for that you can’t minister to Models, or that you’ve had a baby in high school and don’t qualify to serve in the youth department, or that you had a divorce and can’t share your lessons at the singles meeting because the world would say or not say.

You know what God said when Moses talked about his flawed speech/tongue? God asked, “Who makes a person’s mouth? Who decides whether people speak or do not speak, hear or do not hear, see or do not see? Is it not I, the  Lord? Now go! I will be with you as you speak, and I will instruct you in what to say.” (Exodus 4:11-12 NLT)
The key word there is who decides?

REMEMBER: It is God who decides if you’re qualified; not your flaws, history, past or people’s opinion! Just answer the call!

Read: The Rules of Self Esteem

Moses said, Lord please send someone else. God became angry. God felt, come on now Moses, am i not enough? You still need another person? And so God said okay, you can go with Aaron (Exodus 4:13-16).
That was how Aaron got called too!

If Moses had said “okay God, I don’t understand it, neither do I feel qualified yet but I’m just going to go.” Don’t you think God would have perfected his speech/tongue? I believe God would have.

Many times callings get transferred because after all God has done to assure us that He was on our side, we just kept saying, “No Lord, please send others”.
Moses was lucky his wasn’t transferred though but his stammering tongue never got healed.

Remember: God saw everyone else but believes in you. Accept the call.

Read: 7 Choices You Will Regret in 7 years time

Moses had earlier killed an Egyptian in bid to save an Israelite (Exodus 2:12). In fact, that was why he went on exile in Midian. He was scared that they might still be present to kill him if they caught him; but God assured him that they were dead (Exodus 4:19)

For us, it might not quite be that we committed murder. We probably might have done something in the past that others feel we need to pay for. We would want to hold back because we are afraid of wagging tongues, people reminding us of our failures and all that.

I need you to know that when people try to crucify you because of the past, you must look to the one who saw that flaw/mistake/crime and called you anyway. He will defend you.

Remember: The Lord is a shield to those who take refuge in HIM (Proverbs 30:5)

GO ABOUT YOUR CALLING/PURPOSE/ASSIGNMENT!! God doesn’t call the qualified. He qualifies the called.

Committed to Your Fulfillment
Anne Atulaegwu

Are you female and between ages 13-20? You probably want to join LIT mentoring class!!
CLICK for details HERE 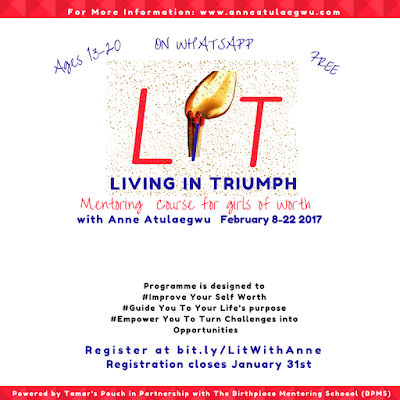