THE LINK BETWEEN PURPOSE AND YOUR GIFT 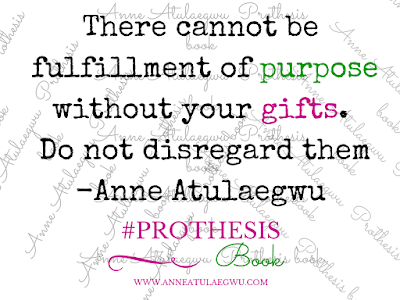 “I wish that all men were as I am. But each man has his own gift; one has this gift, another has that.” 1 Corinthians 7:7

The gift of a man is his most valuable possession. Some people refer to it as talent. It is your gifts, especially when developed that attract people to you and make you relevant. Scripture says that the gift of a man makes way for him.
“A gift opens the way for the giver and ushers him into the presence
of the great” Proverbs 18:16.

There cannot be fulfillment of purpose without your gifts.

I’ll like you to look within you, you know those things you can naturally do well, they are deposits to aid you fulfill purpose.

When I was a child, my primary school teacher usually cautioned me for talking too much in class. I always had something to say whenever anything was happening in class. For me speaking was something I would naturally do anytime, anywhere. Today I am a public speaker. “The  gift” of constructively airing my view is paying off.

God had to put that gift of speaking with people in me, because his purpose for me requires that I speak with people. I don’t struggle to get into a conversation with people. If you ask me, that’s a gift because not everyone can. God gave me that ability because he knows I would need it to fulfill purpose.

Most of the time, the gifts of a man are pointers to what God intends to do with him. You probably have seen a little child who picks up a spoon and uses it as a microphone. While she sings, she arranges her teddy bears on the couch and acts like she’s directing them in a worship service. Most children with such ability grow up to be music ministers. God uses the gift for his purpose and
to his glory.

Get the book Prothesis here

Moses was gifted to help people. He helped the daughters of the priest of Midian to get water for their father’s flock.

“Now a priest of Midian had seven daughters, as they came to draw water and fill the troughs to water their father’s flock. Some shepherds came along and drove them away, but Moses got up and came to their rescue and watered their flock”. Exodus 2:16-17.

He saved them from the unfair treatment of the other shepherds.What kind of a man would offer help to strangers if he hadn’t got the gift (natural ability) to do so?
Another time, he tried to help an Israelite who was in a fight with
an Egyptian.

“One day after Moses had grown up he went out to where his own people were and watched them at their hard labor. He saw an Egyptian beating a Hebrew, one of his own people. Glancing this way and that without seeing no one, he killed the Egyptian and hid him in the sand” Exodus 2:11-12.

That’s the kind of scenario my people, Nigerians would say “Who send you message”? His gift (of helps) was at work. We saw Moses used as a deliverer (God’s Purpose) for Israel. Your purpose can be traced by observing your gifts. However, the Holy Spirit would clearly state God’s purpose for you.

Gifts are natural abilities given to us by God. What are some of the gifts you have got?

In what ways do you presently use these gifts in fulfilling God’s purpose for your life?
.
Get the book Prothesis here